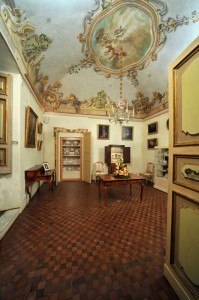 The extraordinary cultural and artistic heritage collected by the Marquises Bourbon di Sorbello reflects the taste for enlightened collecting developed by the brothers Uguccione III, Diomede and Ugolino III, who lived between the late 18th century and the early 19th century. Ugolino III, in particular, purchased an extraordinary set of Ginori tableware with purple figures, composed of over 400 dishes. The set is completely intact, making it a rare example of this genre. Diomede and Uguccione III mainly collected prints and paintings from the 16th to the 19th century.

The art collections are available to scholars for study by appointment with the curator.