Ribbon of fire. How Europe adopted and developed US strip mill technology (1920-2000) 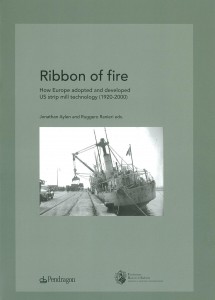 Like railways in the 19th century and the internet in the 21st century, steel strip production was a technology that unlocked growth in a wide range of user industries during the 20th century. Invented in America in the 1920’s, the wide strip mill spread to Europe, allowing a wide range of modern manufacturing industries to emerge before and after the second world war. Hot ribbons of steel strip were gathered into coils to feed car makers press shops, food canners and a range of consumer durable industries. This pioneering book shows how construction of these giant strip mills spread from the US to Europe, transforming steel from a craft industry into large scale, continuous mass production. The book shows how these huge projects were planned, built and commissioned – transforming the lives of communities where they were located. Wide strip mills began in Europe with Ebbw Vale and Shotton in the UK and mills in the Ukraine and Germany. But the real building boom took place in the post-war period. The Marshall Plan acted as a midwife, providing vital financial resources. There was an intensive transatlantic flow of technology and know-how from American mill builders to help European recovery. The early post-war mills (Port Talbot, IJmuiden, Sollac, Cornigliano, Linz) sparked off 60 years of technical innovation, including successive generations of wide strip mills – from Generation II (Llanwern, Sidmar) down to the latest Generation V mills (in the Netherlands, Germany and Italy). Now European steel makers and plant builders lead the world in strip technology. Steel strip remains a fundamental part of our living environment. A decade in the making, this book draws upon a wide range of European contributors and extensive research in public and private archives across Europe and America.